2015: GOOD BYE, DICK. YOU BROUGHT A LOT OF JOY TO YOUR COMMUNITY 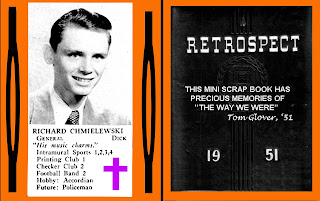 I received a phone call last evening via voice mail from a relative of Dick Chmielewski, our class of 1951 classmate who went on to form the DICK CHIMES polka band. His incredible group brought many wonderful hours to the Kuser Park gazebo when the township engaged professional groups to play at that great venue. Dick was known for a very warm and cordial personality and he had a killer smile for everyone. We'll miss you Dick, and your surviving classmates will re-unite with you in the Hamilton High class of eternity! Rest in peace, my friend.

Richard "Dick Chimes" Chmielewski, 82, of Hamilton, NJ, passed away on September 9, 2015 in Chandler, AZ. Richard was band leader for Dick Chimes and His Orchestra, worked in security for the State House and was is a US Navy Veteran. He is survived by: daughters, Amy Mourkas of Chandler, AZ and Audrey Healy of Murrieta, CA; grandchildren, Jake Mourkas, Alexis Mourkas, Max Mourkas of Chandler, AZ; Megan Johnson, Michael Moran, and Michael Healy of California; and brothers, Ronald Chmielewski of Saluda, NC, Bill Aring of Columbus, NJ, and John Aring of Idaho Falls, IA. Richard is preceded in death by his brother Robert Chmielewski of Trenton, NJ. In lieu of flowers, contributions can be made to the Alzheimer's Association . Services will be scheduled at a later date through Winowicz Funeral Home, Trenton, NJ.
Posted by Tom Glover at 8:20 AM No comments: