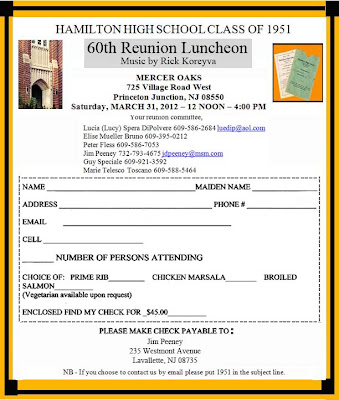 ABOVE IS THE ANNOUNCEMENT OF THE 60TH REUNION OF THE HAMILTON HIGH SCHOOL'S CLASS OF 1951.SENSIBLY, IT WILL BE A LUNCHEON AT BEAUTIFUL MERCER OAKS OVER ON VILLAGE ROAD WEST IN PRINCETON JUNCTION.
SPEAKING OF HIGH SCHOOL REUNIONS, THE POEM BELOW IS A CLASSIC AND UNCANNILY TRUE REPRESENTATION OF REUNIONS FROM THE FIRST 5 WHEN WE ARE ALL YOUNG AND BEAUTIFUL TO THE LAST WHEN WE ARE SADLY CLOSING IN ON ETERNITY. AS A MEMBER OF THE CLASS OF 1951 AT HAMILTON, "THE CLASS WITH CLASS," I PROUDLY AFFIRM THAT I AM A CARD-CARRYING MEMBER OF THE RESIDENTS OF WHAT I LOVINGLY REFER TO AS "WRINKLE CITY." WE EARNED EACH AND EVERY ONE OF THOSE WRINKLES! I GOTTA GO NOW ....Uhhhh. I FORGET WHY......WAIT, IT WILL COME TO ME.....Hmmmm.....MUST BE THAT DAMN SENILITY THING I HEARD SO MUCH ABOUT OVER THE YEARS.

This poem is a classic! It should be read aloud at every high school reunion:
Every ten years as summertime nears,
An announcement arrives in the mail,
A reunion is planned; it'll be really grand;
Make plans to attend without fail.

I'll never forget the first time we met;
We tried so hard to impress.
We drove fancy cars, smoked big cigars,
And wore our most elegant dress.

It was quite an affair; the whole class was there.
It was held at a fancy hotel.
We wined, and we dined, and we acted refined,
And everyone thought it was swell.

The men all conversed about who had been first
To achieve great fortune and fame.
Meanwhile, their spouses described their fine houses
And how beautiful their children became.

The homecoming queen, who once had been lean,
Now weighed in at one-ninety-six.
The jocks who were there had all lost their hair,
And the cheerleaders could no longer do kicks.

No one had heard about the class nerd
Who'd guided a spacecraft to the moon;
Or poor little Jane, who's always been plain;
She married a shipping tycoon.

The boy we'd decreed 'most apt to succeed'
Was serving ten years in the pen,
While the one voted 'least' now was a priest;
Just shows you can be wrong now and then.

They awarded a prize to one of the guys
Who seemed to have aged the least.
Another was given to the grad who had driven
The farthest to attend the feast.

They took a class picture, a curious mixture
Of beehives, crew cuts and wide ties.
Tall, short, or skinny, the style was the mini;
You never saw so many thighs..

At our next get-together, no one cared whether
They impressed their classmates or not.
The mood was informal, a whole lot more normal;
By this time we'd all gone to pot.

It was held out-of-doors, at the lake shores;
We ate hamburgers, coleslaw, and beans..
Then most of us lay around in the shade,
In our comfortable T-shirts and jeans.

By the fiftieth year, it was abundantly clear,
We were definitely over the hill.
Those who weren't dead had to crawl out of bed,
And be home in time for their pill.

And now I can't wait; they've set the date;
Our 55th is coming, I'm told.
It should be a ball, they've rented a hall
At the Shady Rest Home for the old.

Repairs have been made on my hearing aid;
My pacemaker's been turned up on high.
My wheelchair is oiled, and my teeth have been boiled;
And I've bought a new wig and glass eye.

I'm feeling quite hearty, and I'm ready to party
I'm gonna dance 'til dawn's early light.
It'll be lots of fun; But I just hope that there's one
Other person who can make it that night.

************
FROM ED MILLERICK:
Well Tom, the first comment about "closing on eternity", brought a bit of a tear since I am not that far behind. But, the tear was quickly replaced with a smile when I read that delightful poem. And the author was?

***********
SORRY I NEGLECTED TO LIST THE AUTHOR AS ANONYMOUS, ED. HE OR SHE SURE IS A SPECIAL TALENTED POET.
TOM GLOVER

Tom
That poem rings true. 60 years.Lots of water under the bridge. Never made any of the reunions. either was overseas or out of state like I am now. Love to see the the old "wrinkled crowd.By the way I see that one of the commitee members is named Mueller. does she have a sister named Edith?
Just wondering.

Posted by Tom Glover at 6:51 PM No comments: