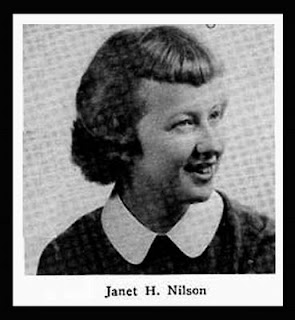 I just learned of her death and have been crying off and on for a few days. I have lost a great friend. She was my neighbor and buddy through elementary schools (Rowan, Willey, Lalor), through Hamilton High School and beyond our 1954 graduation. We shared a love for fun and for the absurd. Janet was very intelligent with a well developed, albeit droll sense of humor. We survived fights in elementary school about, for example, whose legs were more bowed! Together and in groups, we went swimming, skiing, ice skating, to the “Feast” in Chambersburg, to parties, to dances and to the movies in downtown Trenton. We just hung out, grew up together and shared our secrets and our dreams for the future.
Her mother Hilda, from Norway, was a skinny dynamo, who was always very well dressed and who fussed over Janet to a fault. She had a great sense of humor and taught me how to make fattigman, Norwegian cookies! I loved her as well! When they took a trip to Norway to visit relatives, they brought back lovely souvenirs for me.
In high school, Janet was a good student. She was a three year Modern Dance Club member and a two year member of All State Orchestra. She played the violin. She was captain of the Orange Sports Team and was a three year member of the hockey and basketball teams.
She was especially loved by me, Marilyn Block Lister and John Gibbs, also classmates of hers in 1954. Our lives in the fifties were carefree, unsophisticated and truly “happy days”.
Janet and Marilyn Block Lister were bridesmaids, when I was married in 1962. After we were all married and had children, we lost touch only to meet one more time at a bittersweet lunch, which included John Gibbs and Frank Giacobbi, when we celebrated our 50th year reunion. I never saw her again, even though we vowed to get together.
The worst part of getting old is the increasing loss of beloved family and friends. These are people who shared your unique place in history. But how lucky I am to have known someone to whom it was so hard to say goodbye. “A friend hears the song in your heart and sings it to you when your memory fails” (anonymous author).
Rest in peace, my old friend, Janet, you are loved and will be missed by so many.
Posted by Tom Glover at 9:46 AM No comments: